Good questions that many opera­tions personnel would like to answer with a positive “yes,” but can’t. There are several reasons why plants often experience poor reliability on liquid-fuel starts and on fuel transfers, including these:

The first three items are well within the plant’s control. A solid dose of commitment is all that’s needed in most cases. The last two also are within the plant’s control—at least for facilities equipped with dual-fuel GE Frame 6, 7, and 9 DLN engines (including F class)—but they require a small investment either in new hardware or modification of existing equipment.

You may recall that the first liq­uid-fuel systems for dual-fuel DLN engines had separate valves for fuel and purge air. Also, that purge air is supplied continuously when the turbine is operating on gas; it is turned off when operat­ing on oil.

Liquid-fuel check valves are prone to coking because of their close prox­imity to the engines served. Simply put, the light frac­tions in the small amount of oil that remains in the valve when the unit trans­fers to gas distills off, leav­ing a carbonaceous residue which could impede valve operation on ensuing starts and fuel transfers. Residue accumulates with each start and fuel transfer, often pre­venting proper seating of the check valve when oil firing ends.

One of the steps undertaken by the OEM to improve the reliabil­ity of its dual-fuel DLN frames was to combine the functions of the liquid-fuel and purge-air check valves into one valve body. Today, the three-way purge valve (3WPV) is standard equip­ment on DLN-equipped Frame 6, 7, and 9 engines (Fig 2). About 5000 of the valves, made by Jansen’s Aircraft Systems Controls Inc (JASC), Tempe, Ariz, are installed worldwide.

Scores of GTs still are equipped with individual liquid-fuel and purge-air valves and most would ben­efit from conversion to the 3WPV. However, there’s no stampede, according to Schuyler McElrath, because problems associated with distillate firing have caused many engine owner/operators to just give up on oil. Even the 3WPV is subject to coking problems.

By way of background, McElrath spent nearly 25 years working on fuel systems for the OEM before starting his own company, SMTC Inc, Green­ville, SC. He spends much of his time helping users solve liquid-fuel prob­lems on behalf of JASC.

Recognizing the paralyzing effect coking was having on GTs, JASC President Harvey Jansen, a pioneer in high-tech fluid-flow solu­tions for the aerospace industry, went “all-in” on the company’s ability to develop a “cool” liquid-fuel check valve.

The next logical step was to devel­op a water-cooled three-way purge valve (WC3WPV), shown integrated into the liquid-fuel system in Fig 3. A WC3WPV was required because GT owners using this technology needed an inexpensive way to achieve liquid fuel system reliability.

Piece of cake considering the company’s proven success with the WCLFCV. But Jansen, who epotimiz­es the iconic American technology/business leaders Thomas A Edison and Edwin Land (Polaroid), was con­cerned more about cost than simply designing a water-cooled valve. 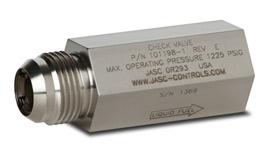 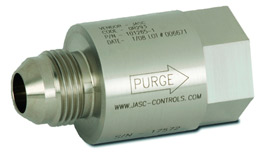 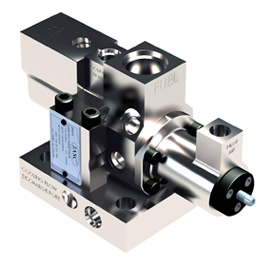 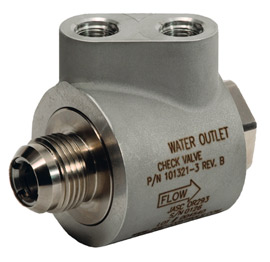